Alexander Calder was a famous American sculptor, known for creating innovative mobiles (kinetic sculptures powered by motors or air currents).  One of his most famous works is Floating Clouds (sometimes called Flying Saucers by the artist), located in the Aula Magna of the University City of Caracas in Venezuela, a UNESCO World Heritage Site. 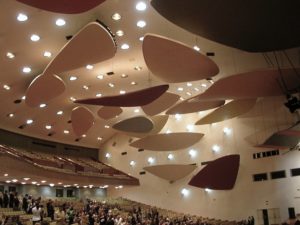 Jane’s will named Phyliss’s brother, Paul, as executor of Jane’s estate.  Jane’s will left all tangible personal property and the residuary to Phyliss and Paul in equal shares.  Paul maintained possession of the work until he sold it to a gallery, Helwaser, in 2016.

The Court’s opinion addresses whether the gallery has any responsibility to Phyliss under a replevin or damages theory — does the gallery have to give the Calder sculpture or its value to Phyliss, who claimed to be the rightful owner of at least half of the work.  The Court said no.

Phyliss seeks to defeat summary judgment by arguing that Jane’s estate had been distributed long before the January 26, 2016 sale and, therefore, Paul lacked executory power over the Work to effectuate its sale to defendants. She cannot be blamed for advancing this reasoning because Helwaser initially framed its argument in terms of having purchased the Work from Paul, the executor, rather than Paul, the distributee under Jane’s will. Phyliss submits the declaration of the probate attorney for Jane’s estate, who asserts that the estate had been fully distributed by the time the estate’s New York State Estate Tax Return was filed in 2002.   Phyliss also notes that no report was ever filed under the Uniform Rules for the Surrogate’s Court as required “[w]henever the estate of a decedent has not been fully distributed” within three years of issuance of the letters testamentary. N.Y. Comp. Codes R. & Regs. tit. 22, § 207.42(a)–(b) (2020). Based upon this unchallenged evidence, the Court agrees that the estate was fully distributed by July 23, 2002, when the New York State Estate Tax Return for Jane’s estate was filed.  As such, Paul lacked executory power over the Work at the time of the January 26, 2016 sale to defendants.

Finding that the Work was no longer part of Jane’s estate on January 26, 2016 does not end the Court’s inquiry. Helwaser correctly notes that “the relevant inquiry is not whether, at
the time of the [Paul’s] sale to [Helwaser], the Work was still part of [Jane’s] [e]state or whether [Paul] owned it outright.”  Instead, Helwaser succinctly asserts that “the fundamental question . . . is whether Plaintiff had any ownership in the Work.”   The Court agrees and concludes that no reasonable jury, properly instructed on the meaning of the language of Jane’s will and the governing provisions of New York law, could conclude based on the evidence produced that Phyliss had any ownership interest in the Work as of January 26, 2016.

Apparently, Paul may not have fully reported to Phyliss a complete itemization of estate assets to himself and Phyliss.  If he had, it would have been abundantly clear who received the Calder from the estate.  The Court was clearly motivated to respect the interests of third party purchasers for fair value, who would have no idea about whether an estate was administered properly and fairly.

Paul’s broad discretion as executor permitted him, upon distribution of the estate to its beneficiaries, to take possession of the Work as a distributee and grant Phyliss a credit for one-half of the appraised value of the Work on that date. As such, the distribution of all estate assets by July 23, 2002 is in no way inconsistent with the Work having been distributed by Paul, as executor, to himself, as distributee, with an off-setting credit to Phyliss, especially since the $2.7 million estate contained ample assets to cover an offsetting credit for one-half the value of the Work, which was then appraised at $30,000.  Such a distribution is legally permissibly.

Phyliss produces no evidence in support of her allegation that she received an “undivided one-half interest” in the Work upon the estate’s distribution. Phyliss produces no Surrogate’s Court filing, no accounting, and no inventory to support her possession of anything more than a beneficial interest in the Work, an interest which could have been satisfied by the provision of one-half of the Work’s appraised value on the date of distribution. She produces no documents reflecting the details of the distribution of Jane’s estate. Without such evidence, Phyliss cannot demonstrate to a jury that she received an actual ownership interest in the Work upon distribution or that she did not receive an off-setting credit, in the form of in-kind property or cash, in satisfaction of her beneficial interest in the Work. She offers no allegations of an oral agreement or even a conversation with Paul, reflecting an intention to distribute the Work in a manner such that the siblings would share joint ownership.

Aggrieved Beneficiaries Should Pursue the Executor of the Estate, Not Third Party Purchasers

In concluding that Phyliss should have pursued a remedy against the executor, Paul, rather than pursuing a third party, the Court explained (citations omitted):

In the event that Paul, as executor, breached his fiduciary duties through the distribution of the Work or otherwise, the remedies available to Phyliss, as the injured beneficiary, in New York Surrogate’s Court were sweeping.  The beneficiaries may have the option of not only charging the fiduciary with a loss or making him account for a gain but also of charging him with a gain which was not made but would have been made if the fiduciary had not violated his duty.